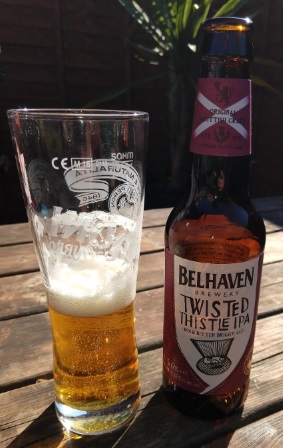 This the second in a range of Belhaven brewery ales purchased recently.

Similarity to the Speyside Oak Aged blonde ale reviewed yesterday this is a true light golden ale. Unlike Speyside, Twisted Thistle IPA has a white head that remains replenished by high levels of carbonation. 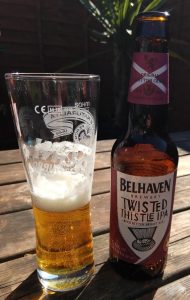 Twisted Thistle is described on the bottle as an American style IPA with grapefruit aroma and bitter aftertaste. I did not get any of the grapefruit aroma but there is definutly a bitter aftertaste. This feels like a true IPA. I understand why it states ‘BOLD’ on the bottle. It has a nice hoppy initial flavour followed up with a medium level of bitterness that lingers.

Overall I would describe Twisted Thistle as a strong flavoured IPA that would suit people that like strong bitter tasting ales.