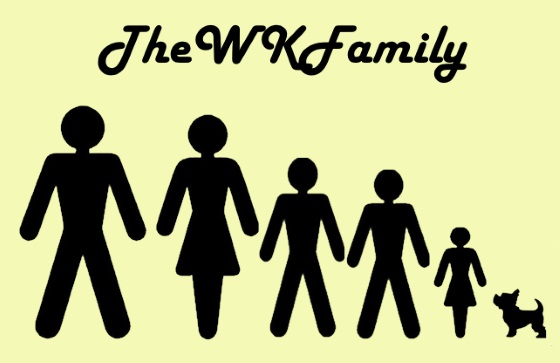 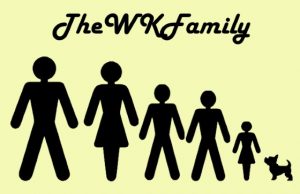 Average family based in the south east of England.

2.2 kids (well really 3) and a fluffy animal that is sometimes mistaken as a dog.

MrWK works as a IT manager for a global financial institution. Work often tries to get in the way, so striking a work-life balance is sometimes hard. He loves going out for a cycle (mountain biking only) with or without the kids. You may sometimes see him with a trailer carrying ThePrincess. He also can be found in local woodland, Surrey Hills or sometimes Bike Park Wales. What he lacks in skill he makes up for in enthusiasm.

BBQ and Beer are important part of MrWKs life however the Beer vs Waistline balance must also be maintained. MrWK is currently supporting MrsWKs slimming world plan in the hope that it means he can drink more beer.

Geek at heart MrWK likes nothing more than trying out new gadgets especially crafting simple circuits with a Arduino or Raspberry Pi. Currently playing around with automation and cloud technologies.

MrsWK is a published author.

Her cooking is legendary in our house. Crafting tasty meals out of nothing. More recently MrsWK has been following the Slimming World plan. This has been a great success. Not only is she loosing weight but also has made some great friends.

Sometimes life seems to revolve around the family. Wine used to plan an important part in MrsWK’s life prior to Slimming World. Perhaps there is a connection there worth investigating 🙂

MrWK loves MrsWK completely and will do anything to support her in anything she does. (MrWK put this in)

Exp1 has recently hit the teenage years.  Hormones are going mad. He’s slim, strong, handsome and clever. (He’ll hate the fact that I put this in).

He loves Xbox, Movies and books. He can be found hiding in a corner reading or hanging off the bed and an odd angle playing Halo.

As a teenager he often speaks in grunts, whistles and chirps. It can be like living with R2D2.

Exp2 is a fews years younger than his brother.  They are inseparable but also argue most of the time.

He is also an Xbox regular. As long as the grades are maintained at school this is overlooked. His favorite books are the Alex Rider series.

He like his brother can often be found joining his father for a cycle however needs to be encouraged a little more.

What to say? The Princess is currently the center of the WK family. Everyone from family members to strangers seem to orbit around her. She has the ability to charm and inspire fear at the same time. A future ruler in the making.

Life involves much more pink than it used to from fairy lights to clothing.

The princess loves to pester MrWK into attaching a trailer on his bike and going to local parks. More recently she has also started riding her own bike at speeds that others cannot keep up with.

MrWK is looking forward to taking her to Bike Park Wales in a few years.

Raising a girl is harder than raising boys. It’s a simple truth.