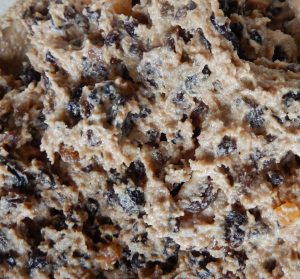 Stir Up Sunday is coming! The WK family are huge Christmas pudding fans. I will freely admit that I have already purchased a couple of small, store bought puddings, but, in my defence, these are to throw at my husband throughout December to keep him away from the homemade one.

Although the fruit needs soaking overnight, the pudding takes little effort, you just chuck some lovely things into a bowl and cook it in the slow cooker.

Soak the dried fruit in the whisky overnight.

Mix everything except the whisky infused mixed fruit in a big mixing bowl.

Once combined, add in the mixed fruit and stir.

Grease the pudding basin using either butter, or fry light. Cut out a small circle of grease proof paper and stick it to the bottom of the pudding bowl. This will make easing the pudding out of the basin a doddle.

Spoon the pudding mix into the basin, pressing it down lightly to fill any gaps.

Pour 2” of boiling water into the slow cooker, pop the pudding into the water and cook on low for 8 hours.

To reheat: pour a couple of inches of boiling water into the slow cooker, pop in the pudding and heat for at least five hours.